Ergin Ataman: This team made the history of European basketball

Anadolu Efes’ Head Coach Ergin Ataman said, “We have accomplished a great job. This team made its way into European basketball history. I'm proud of my players.” 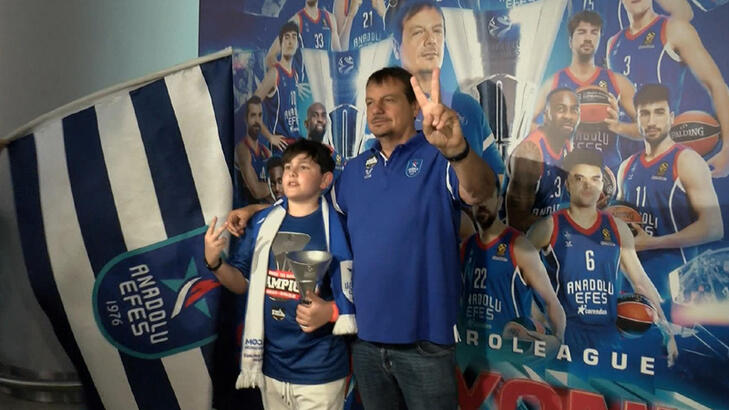 Anadolu Efes defeated Real Madrid 58-57 in the final of Turkish Airlines EuroLeague Final Four and became Euroleague champion for the second time in a row.

A welcoming ceremony was held for the Anadolu Efes group arriving at Istanbul Airport on the Corendon Airlines flight departing from Belgrade.

Noting that they are very happy, Anadolu Efes’ Head Coach Ergin Ataman said, “We know that the hearts of the Turkish people beat with us. We have been jubilant as a team since last night. We have accomplished a great job. This team made its way into European basketball history. I'm proud of my players. I hope this type of success in Turkey will continue to increase. As a Turkish sportsman, I am happy on behalf of all sportsmen, on behalf of all coaches, as I represent Turkey in this way. I hope that Turkey will experience much greater success. We are receiving incredible messages since last night, there is love, this match was watched all over Turkey. The Euroleague championship for the second time in a row was greeted with a glow. Thank you, everyone. Hopefully, this will continue.”

SARP ATAMAN: WE WILL FINISH THIS SEASON WITH 5 CUP

Ergin Ataman's son Sarp Ataman said in his statement, “We have more trophies to win this year. Turkish league, Turkish and European championship, and then the President's Cup, we will finish this season with 5 trophies. I trust my father. I trust both Efes and the Turkish national team. I know everything we can do and the power of the Turkish nation.”

DOGUS BALBAY: WE ARE VERY HAPPY TO BRING THE CUP TO OUR COUNTRY

Anadolu Efes’ captain Dogus Balbay said, “You supported us in many plays, we brought this trophy to our country, we are very happy. Thank you for your support.”