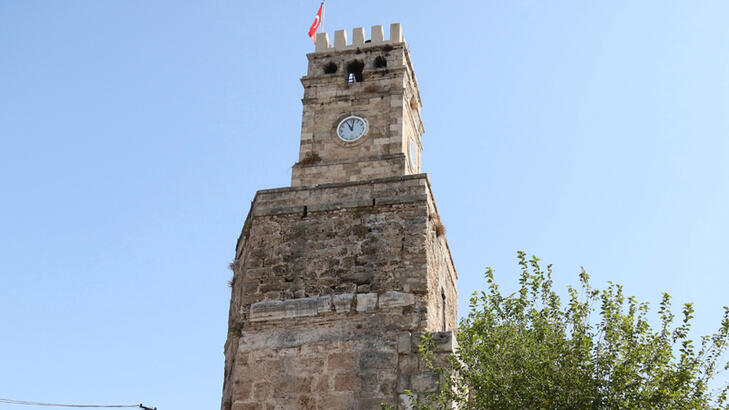 Restoration work, which started in February, continues in the structure, which is one of the most important symbols of Antalya, located on the bastions dating to the Hellenistic period, the tower part was built in the Byzantine period and was built as a clock tower in the early 1900s during the reign of Abdulhamid II. Restoration and excavation work in the Clock Tower has been supervised by the Regional Directorate of Foundations, and the Museum of Antalya, and has been carried out with the approval of the Antalya Cultural and Natural Heritage Preservation Board within the scope of the project prepared by Associate Professor Esin Kuleli from Antalya Bilim (Science) University.

FILLED WITH CONCRETE UP TO 8 METERS

Two 40-kilograms lead pieces had been found at a depth of about 1 meter, one for the clockwork and the other for the bell at the top of the tower to ring every hour, during the excavations in the tower, which resembles a ruin, in the area filled with concrete up to 8 meters above the ground in previous years. In addition, the bell and other parts in the tower had been delivered to the Antalya Museum Directorate for conservation.


ORIGINAL CLOCKS WERE REPLACED WITH THE PLASTIC ONES

During the restoration, it turned out that the clocks on all four sides of the tower, which has a height of 22 meters, were not original. While it was suspected that the original clocks may have been stolen in 1988, it was determined that the clocks that were replaced at that time were also plastic. Additionally, it was determined that the iron frames used to attach the plastic clock to the historical stones cracked the stones with their weight over the years. Both the iron frames and the non-original plastic clocks in the tower were dismantled and removed.


WILL BE RENEWED IN ACCORDANCE WITH THE ORIGINAL

Recep Gurgen (75), who made the last repair of the Clock Tower in 1985 and is considered one of the important names in his field in Turkey, was contacted to work on the reconstruction of the clock in accordance with the original clock in the 1900s. Head of the Cultural Heritage Unit of Antalya Governorship, Cemil Karabayram announced that the clock, after which the tower was named, was found not to be original during the dismantling.